After a short talk on my journey in writing my book, TOXIC STAPLE, within 10 minutes of each other, two different people told me of their friend whose child had been diagnosed with celiac disease. I took a minute to explain that sometimes doctors neglect to inform them that other siblings and the parents should also be tested due to the genetic component of celiac disease. The general answer I get is “Oh, the child (or other children or themselves) was negative.” In which case I inform them that quite often not enough testing is given to detect an intolerance.

I can vouch for this myself with just about everyone in my family except for the grandchild that was very compromised and was off the charts positive for celiac. The rest of us all tested negative on the blood tests, and I had read enough to even request 3 tests. I hadn’t discovered the specialized stool test until a few months later. We were all positive on those. If we hadn’t done Dr. Fine’s stool testing I shutter to think how much more our health might have slipped down the tubes.

It seems mainstream medicine is setting the bar too high and too often they give only one test and by the time someone tests positive for celiac they have a full-blown case or near to it with very damaged villi (hairs that absorb nutrients)…..and quite compromised health.

Be thankful you or your other children did not test positive for celiac disease (yet), but that is not the end of it until you make sure you have received enough testing to detect intolerance to gluten. It’s kind of like preventative medicine.

You will need to become your own advocate as few doctors are giving a panel of 4 blood tests, few are recognizing they should also be looking at the lower antibody numbers, and most of them are unaware of a very sensitive stool test that will pick up intolerance in nearly 100% of the cases.

If you can catch gluten intolerance before your body becomes so compromised, you are ahead of the game of life.

As always, please share my information with your doctor.

I spell it out in TOXIC STAPLE with research to back it up. The real story is not just about celiac disease, it’s also, and more so, about whether one is intolerant to gluten. It seems to be a progressively worsening continuum, according to some experts. 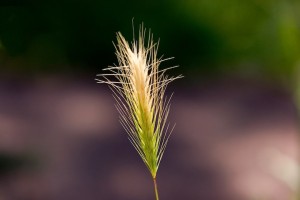 Until there are mandated conferences for doctors in all facets of medicine (dream on), since gluten can affect any part of the body, you may need to become your own health-seeking advocate. You need to know the blood tests to REQUEST. All too often not enough testing is given to detect celiac disease or gluten intolerance and the patient is told she/he doesn’t have a problem, can still eat gluten, and meanwhile is still having troublesome health issues.

TOXIC STAPLE will provide testing information that will very likely detect a gluten issue if there is one. Sorry, but the one blood test often given may be negative and the patient may be quite gluten sensitive. By the time you test positive on the one blood test you most likely have full-blown celiac disease with very damaged villi and a very compromised body. Even if the panel of four blood tests is given you may still test negative, but be quite gluten intolerant.

This is when it would behoove you to read and “absorb” the stool testing information in Chapter 17. This testing saved my family, as we were all negative on the blood tests except for the baby (not old enough to test), and one grandchild with full-blown CD.

The book will empower you with the knowledge to get to the bottom of what’s ailing you or a loved one, if gluten sensitive, to find greater health, energy, and vitality just as my family and I have. It is not rocket science. It is about removing the toxic staple that is making you sick and tired, and jeopardizing your health in a myriad ways!

Although I wrote the book for the masses that are so sick and tired of being sick and tired, or misdiagnosed, undiagnosed, or over-dosed, it is being recommended for health care practitioners by medical professionals up on gluten. So please do consider loaning a copy to your doctor.

Kindly share this site with family and friends who may have chronic health issues.

You may have tested negative on the one blood test often given and been told, “Gluten is not your problem.”

Unless your blood test is positive, denoting full blown-celiac disease, the one blood test you may be given is very likely not enough testing to track down the insidious gluten sensitivity. It is important  to REQUEST a panel of four blood tests (there is more likelihood to detect it with more than one blood test), and if negative on blood testing it would behoove you to follow up with stool testing.

I met a woman recently whose life is miserable with stomach/intestinal ailments and fatigue. She tested negative on the typical one blood test her doctor thought to give her and was told gluten was not her problem. The doctor didn’t know what was making her so sick. The woman’s granddaughter has so many food sensitivities that there is not much she can eat. The child’s mom has Crohns. I urged the gram to read my book (testing info that will likely detect a sensitivity/intolerance to gluten) and to look further into the more sensitive stool testing. I expect gluten is at the root of most of their issues and I expect they all could have a much better life with a bit of gluten detection and a gluten-free lifestyle. This is a common scenario: doctors unaware of the hazards of gluten and adequate testing.

Please do not postpone getting screened for celiac disease/gluten intolerance if you are suffering, especially from stomach/intestinal issues (but there is so much more). Life seems to only get worse over time. It could take decades for serious ailments to evolve —ailments you don’t ever want to deal with. If you are already dealing with serious health issues you may be able to turn many of them around. It’s never too late to detect the cause, delete the “toxic staple,” and realize better health, as exemplified by the numerous success stories in my book, TOXIC STAPLE.